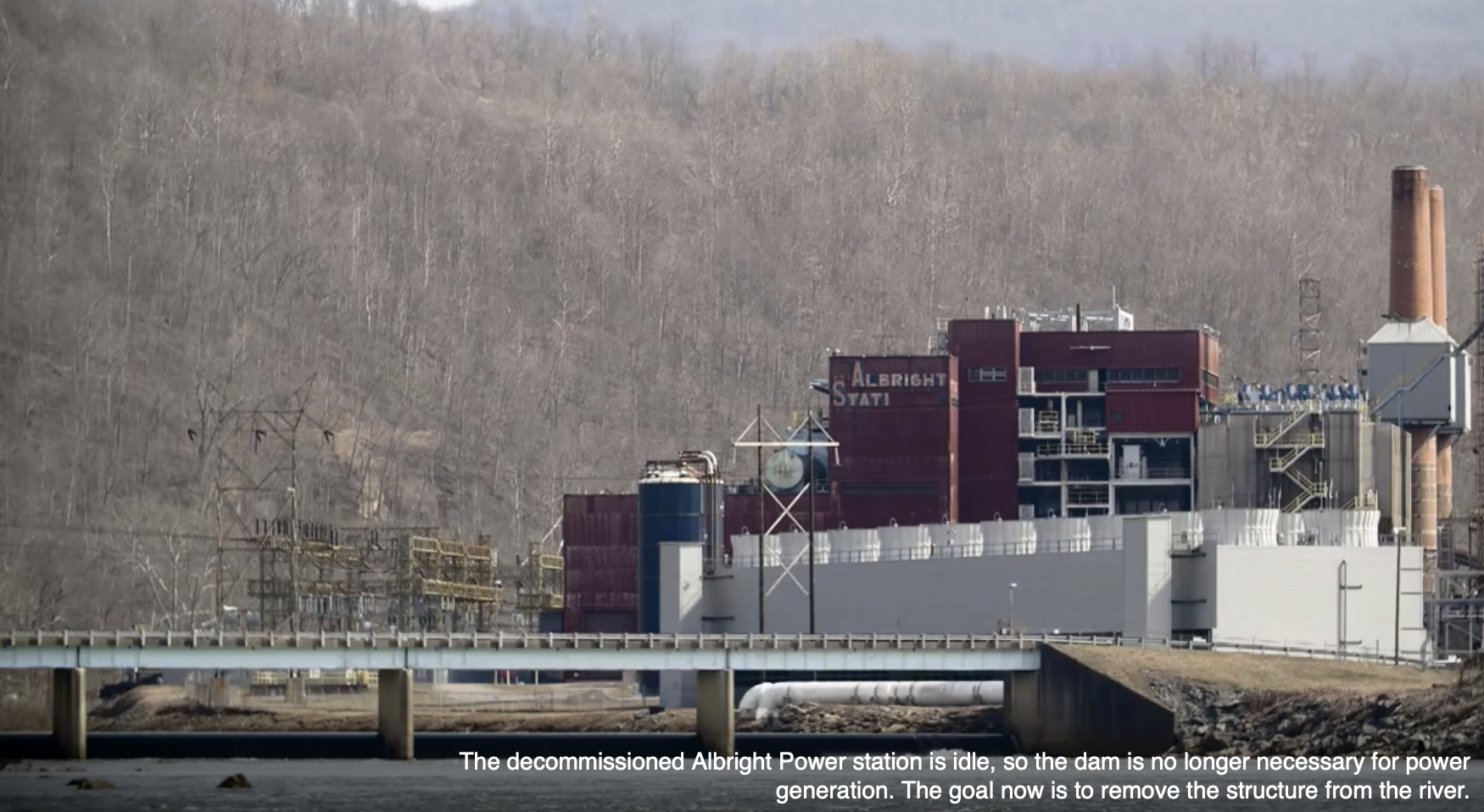 The decommissioned Albright Power station is idle, so the dam is no longer necessary for power generation. The goal now is to remove the structure from the river.

ALBRIGHT, W.Va. — A conservation organization dedicated to improvements to the Cheat River is ready to take the next step on the long restoration of the water way. The Friends of Cheat recently received a more than one Million dollar commitment in federal funding for the removal of the dam on the river at Albright.

The dam was built in the 1950’s to create a water supply for the Albright Power Station. However, the station was decommissioned and now sits idle. Although the future of the property is uncertain, the generation of power is gone for good and river advocates believe that’s a good opportunity to remove the dam to improve river access, for paddlers, anglers, and for fish.

“There’s no need for it now. It’s an obstruction to fish movement and it eliminates eight miles or so of floatable fishing water because there is no access around the dam,” said Frank Jernejcic on a recent edition of West Virginia Outdoors.

Jernejcic is a retired fisheries biologist for the Wrest Virginia DNR who has dedicated countless hours both in his professional and personal time to improving the quality of the river. He said those efforts are paying off.

“It has been a remarkable turnaround and much of the credit is due to Friends of the Cheat who have mobilized federal money and state money to organize clean ups and remediation of the many, many abandoned mine drainages that occur in the watershed,” he said.

smallmouth bass from the Cheat River would have been unheard of three decades ago, but work of the Friends of Cheat, DNR, DEP, and concerned anglers has changed history on the waterway.

During the late 1980’s the river was nearly a dead waterway. It was on the nation’s most polluted rivers  list and was almost void of any aquatic life. The organization lobbied for water quality improvement policies and secured federal and state grants which started to eliminate the acid mine drainage sources one by one. Only a few remain to be fixed and the fishery’s rebound is a testament to the efforts.

According to Jernejcic the fish are just healthier.

“Back then if you caught an 18 inch smallmouth bass from the Cheat it would be about a pound lighter than one caught in the New River. They were conditions where the fish were thin and skinny, but now they rival the New River. It’s impressive,” he said.

Even more impressive have been reports of nice musky and walleye caught on the river in recent months. Both species are most sensitive to water quality.

“The musky came from upstream a result of a flooded pond at the Bowden Hatchery about ten years ago. The walleyes have come upstream from Cheat Lake. Once we remove the dam those fish will swim all the way to Parsons. Removal of the dam is a benefit to all fish species.” Jernejcic explained.

Leaders from the  U.S. Fish and Wildlife Service and the U.S. Department of the Interior visited Albright to announced the awarding of $1 Million from the Bipartisan infrastructure law signed by President Biden. The Albright Dam Removal Project is one of 40 fish passage projects in 28 states to be funded by with nearly $38 Million in the National Fish Passage program this fiscal year. The funds are aimed at removing outdated, obsolete, or unsafe dams, culverts, levees, or other barriers to fish passage or aquatic conductivity.

Beyond the benefits to the fish in the Cheat River, the accessibility to the river for the public will be substantially increased.

“It’s going to give us two new access sites, one upstream of the dam about five or six miles and a second about a mile and a half downstream. Both of those are owned by the Friends of Cheat, so they’ll be a public facility,” he said.

The money is secured and the work is expected to start next year. First Energy still owns the property and negotiations continue on what will happen with the plant property in the future.

“We hope to work with First Energy. We don’t know what they are going to do with the property, but it won’t be used as a power plant ever again,” Jernejcic said.