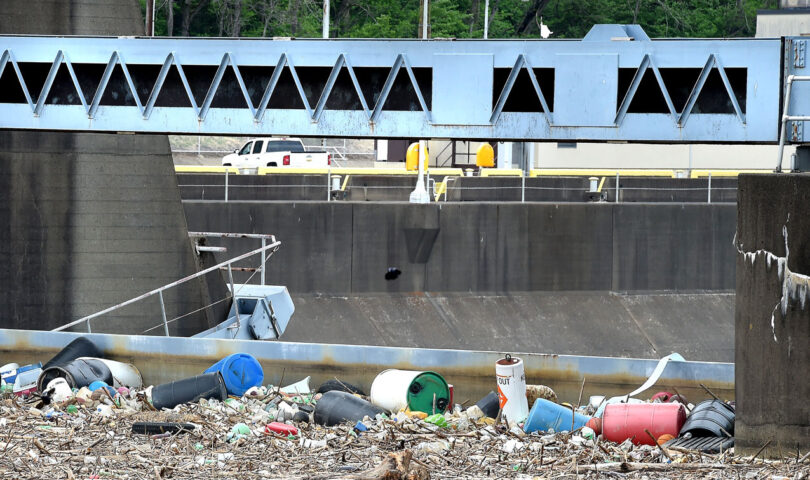 MORGANTOWN — The city of Morgantown and its partners have invested millions with the hope of pulling people to the Monongahela River.

Now the city has recycled back to looking at how it can pull trash out of it.

As a part of its American Rescue Plan programming, the city allocated $350,000 for river cleanup.

Morgantown City Manager Kim Haws said a portion of that money was used to procure a conceptual design for a trash collection device, or trash wheel.

A somewhat famous example of a trash wheel can be found in Baltimore’s Mr. Trash Wheel, which was installed in 2014. It has since been joined by three others, all using flowing water and solar power to pull trash out of the water and onto a platform.

Local implementation, however, would require the city to navigate a couple potential hurdles.

First, the primary location for trash to accumulate is behind the Morgantown Lock and Dam. The placement of any structure in that area would require approval from the U.S. Army Corps of Engineers’ Pittsburgh District.

Morgantown Communications Director Andrew Stacy said Army Corps representatives were involved in preliminary discussions on-site, but it’s not clear when the city could expect any feedback.

The Dominion Post reached out to the ACOE Thursday.

“We agreed that this project is an excellent idea, that it would benefit the community and the local environment; however, the proposed location of the trash collection device is in a restricted area near the dam, so the district is currently reviewing regulations to ensure the proposal’s parameters are within our authority to move forward with,” U.S. Army Corps of Engineers Public Affairs Specialist Andrew Byrne said.

Byrne said this type of project would be a first for the district, noting environmental stewardship is one of the corps’ top priorities.

Mayor Jenny Selin said preventing the island of trash that accumulates behind the dam has been a longstanding wish of the city.

“If we were able to do that, that would be the coup of a couple of decades because we’ve had numerous meetings with the Corps asking about this before, and not a lot of success,” she said.

When the issue was raised in 2018, an ACOE spokesperson conceded the continually growing collection of trash at navigation facilities is an eyesore. He also noted the only available recourse is to open the floodgates and let it meander downstream.

The city actually has, as part of its contract with trash hauler Republic Services, provisions for the removal of trash pulled from the river and collected on-shore.

It’s getting the trash out of the water that’s the issue.

For years, a flotilla of volunteers would snag debris from the river after the ACOE opened the floodgates, but the city ended that practice.

Former City Manager Paul Brake said the uncertainty of what is actually in the water made it too dangerous to allow volunteers in boats and wetsuits to handle.

But even if the ACOE gives the trash wheel a green light, the question of cost remains.

Stacy said the city has a “very rough idea” of the potential cost, noting it ranges from six-to-seven figures, depending on factors, including size and location.

And if the ACOE says no?

“I guess the follow-up is ‘Then what?’” Councilor Dave Harshbarger said. “There’s got to be something we can do.”