As I understand the plan, you propose to install a wheel on the upstream side of the Morgantown dam above the easternmost Tainter Gate. I believe that this is officially Gate #6.

Rye Development LLC has an active permit for construction of a hydro-power plant just downstream of the same gate. Both you and Rye may be planning on using some of the same space. You are proposing a Dumpster Ramp at the site. Normal river pool elevation here is 814 feet

and the Caperton Rail-Trail has an elevation of about 825 feet. The required lift is at least 10 feet and the horizontal distance is probably less than 25 feet. This makes for a tough dumpster movement. This would have to cross the trail, and would meet with fierce local opposition from trail users.

Your planned site may fall at least partially on Corps of Engineers operational facilities. There is potential conflict with fishing access at the site.
During heavy rains debris is launched toward Morgantown from sites as much as 60 miles

away. Sites include industrial, commercial, residential, forest, and agricultural activities. Some of these still use illegal open dumps. Others are operated with minimal concern for environmental issues.

The purposes of the dam are to (1) establish a constant pool level above the dam for barge navigation and (2) to control flow of the water supply to downstream navigation dams reaching down into the Ohio River below Pittsburgh. This is a regional operation, not a local one. The Corps changes gate openings remotely with changing water flow requirements. The dam does not control flooding, but receives flow from large upstream flood control reservoirs. During the summer there may be virtually no river current while during flood runoff the river current may exceed 5 mph.

During the planning for the Rye plant massive amounts of flow information were gathered, and may be available to you from either Rye or the Pittsburgh District Corps office.

As I see it, your wheel must handle all trash which is intercepted by the boom. Much of this is an easy matter, but there are also many items which pose potential difficulties.

If construction of the Rye power-plant does proceed, it is likely that all flow through Gate 6 may be shut off for periods of weeks at a time. There also may be shutoffs for maintenance if the plant is built. During flood flows very high currents must be expected. Rye will, of course, urge the Corps to maintain high flows to maximize power generation.

Natural Debris in the River

Much of what is visible on the river is not trash, but part of the natural aquatic environment. These items should, or perhaps must, be returned to the river downstream of the dam according to WV DNR policy. Specifically the facility must be prepared to handle and transfer:

River trash and debris, consisting of man-made rubbish and naturally-occurring items such as wood wastes, deposits on river banks and at riverside facilities, and accumulates behind locks and dams. The US Army Corps of Engineers has no facilities for collection and disposal of this trash, so they periodically flush it downstream. It eventually sinks, rots, or ends up in the oceans.

Locally the trash creates many problems, including:

Water pollution, hazardous to humans and aquatic life, from chemicals and hazardous materials in man-made rubbish;

Interference with, and damage to, locks and dams.

The US Environmental Protection Agency has an on-line report pertinent to the floating trash and debris problem. It is Marine Debris Abatement at http://www.epa.gov/owow/oceans/debris/

The trash which accumulates behind the Morgantown Dam has been a public irritation for many years. As the development of trails, hotels, and other amenities along the river bank has accelerated, so has a public sense of outrage. UMRA is joining with local groups to search for a solution to this problem.

For several years Tim Terman has run a trash removal effort using kayaks and a pontoon boat with volunteers ranging from children to adults. Tim was selected as one of the Dominion Post ‘s100 Most Influential Citizens in 2008 in recognition of his efforts. Tim has proposed installing a trash boom at the Hildebrand Dam to reduce the amopunt of trash reaching Morgantown. You can read his proposal.

Dams are not all alike, even on the navigable portions of the rivers of the Pittsburgh District. The water flows under our dam. This is why floating trash accumulates so readily behind it. On many dams, water flow is over the dam, and most floating material passes without major impediment.

It is not unfair to say “the Corps created our trash problem” as a part of solving other river problems. Of course, in the 1950s there were few plastic products and many containers were returned for refilling. The current problem was not foreseen.

Resolution on Floating Trash by the City of Morgantown

Resolution on Floating Trash by the City of Westover

Resolution on Floating Trash by the Town of Star City

Resolution on Floating Trash by the Monongalia County Development Authority

Resolution on Floating Trash by the Monongalia County Commission

A Sample Resolution on Floating Trash

All Dams on River Are Not Equal: Design of Local Facility Causes Part of the Built Up Debris Field – Morgabtown Dominion Post – March 27, 2004

That Dam Trash: Pileup of Debris in the Monongahela an Eyesore – Morgantown Dominion Post – March 23, 2004 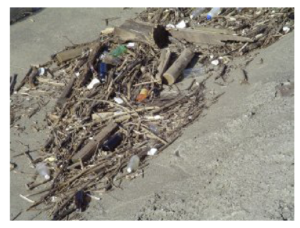 Our Search for a Solution

The Nature of the Trash

There is little hard data on the trash involved, but we know that it has the following characteristics:

Material such as leaves, branches, and trees ends up in the river as a result of natural processes. From an environmental perspective, this material is part of the food chain for river life. Although large logs may be a hazard to navigation, they provide important fish habitat.

Organic material from timber and landscaping operations, and construction debris, also finds its way into the river. It is unclear whether this constitutes an additional resource or a problem.

Much of the most visible trash consists of light plastic items such as bottles, balls, and styrofoam. We do not know how much of this is the result of intentional dumping (point sources), and how much results from simple littering and wind and flood dispersal of materials (non-point sources.)

We have suggested that an initial phase of a search for a solution should include a study of trash characteristics, possibly based on video surveillance at the dams. A video surveillance program might make be included in a system which also serves other security needs.

* Barrels are an interesting sub-category. Most are empty and benign. Because they are potentially very hazardous, the US Coast Guard instructs its Auxiliary patrols not to touch them, but to inform relevant local authorities of their presence. In most areas such local authorities do not have the training or equipment required to deal with them.

Novel Boats That Remove Trash And Debris From Waterways

There are boats designed to remove floating trash and debris. As far as we can tell, none of these has been used in turbulent waters typical of those near our navigation locks. Our preliminary estimate is that such a bout would involve an initial investment of a quarter to half a million dollars in the boat and support facilities, and an operating cost of about a hundred thousand dollars a year.

Check out these websites:

The U.S. Army Corps of Engineers Huntington District has been a leader in the study of the trash problem. We have recently received a copy of the Bluestone Drift and Debris Evaluation Study published in December 1996. It includes about 200 pages, which we are still reviewing. Bluestone Lake is of economic concern because a high precentage of West Virginia’s whitewater rafting business is conducted on the waters down stream.

This evaluation study addresses the potential for modification of the Bluestone Lake project. For the purposes of the report, drift is defined as natural, woody material, and debris is defined as man-made refuse. Both can be found floating down the New River, most notably during flood events. The legislation concerns the handling of this drift and debris at the Bluestone project and the development of technologically feasible measures to address the problems associated with drift and debris management at the project. An initial review conducted as a part of this study has found that the primary source of the drift and debris management problems at Bluestone are due to a change of operating pool levels during project construction 52 years ago and the continuing placement of solid waste within the floodway of streams by residents of the region. The interim drift and debris management technique adopted for the Bluestone project 52 years ago has proved to be a long-term operating plan, but it is no longer acceptable because of changed perceptions and conditions in the region.

Improved Operating Equipment: The improved equipment includes a new motorized barge with a crane to allow continuous removal of bulky and/or obtrusive man-made debris. The new barge would be fitted with attachments for cutting logs and pushing floating material to the multi-level release tower. a Jon boat with motor and trailer to assist with debris removal and transfer. A 5-ton dump truck to transport solid waste collected from the lake’s surface.

The National Park Service (NPS), and the West Virginia Department of Environmental Protection (WVDEP) are working with the Corps on a Public Awareness Program and a downstream cleanup component

The downstream cleanup component includes two stages. In the first stage, partnering with WVDEP, the Corps would address existing deposition along a 55-mile reach of the New River from Bluestone Dam to Hawk’s Nest State Park. The work includes manual efforts to pick up man-made debris, water transportation to access points, loading debris onto trucks, transport, and appropriate disposal.

Stage Two is a periodic downstream cleanup. WVDEP and NPS would be responsible for this effort. WVDEP and NPS participation in stage two is funding dependent, and not considered a requirement for commitment of Federal funds for stage one. The periodic cleanup is merely a plan component which WVDEP and NPS will continue to implement, and not a post-project operation and maintenance requirement. Corps participation will be reflected through increased efforts to remove man-made debris from the lake surface during periods of inflow.

UMRA notes that this is a very expensive operation, and we understand that underfunding of Corps and NPS budgets, along with WV funding issues, is drastically hampering efforts in 2004.