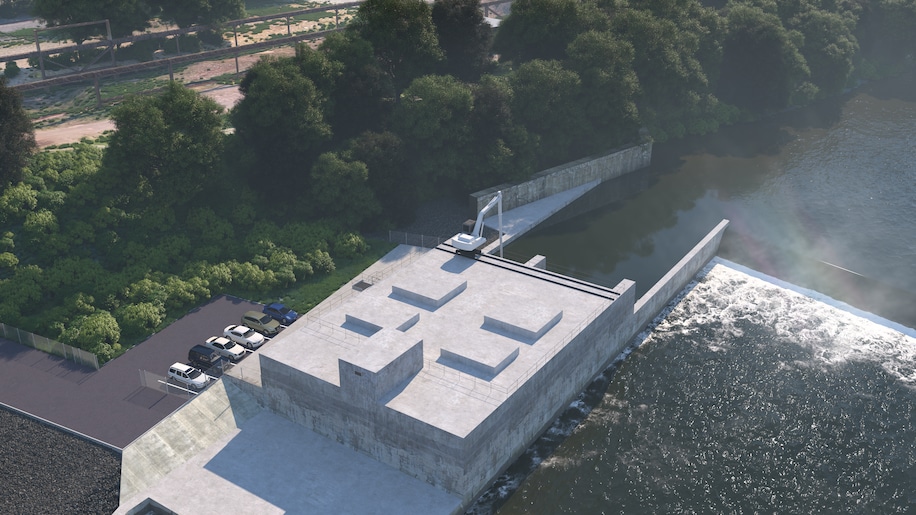 Out of about 90,000 dams in the U.S., few generate hydropower. A push to retrofit nonpowered dams could change that.

A rendering of the Allegheny Lock and Dam #2 project to electrify a dam near Highland Park Bridge in Pittsburgh. (Photo illustration by Rye Development)

The nation’s iconic dams — Hoover Dam or Lake Powell’s Glen Canyon Dam — were built during the heyday of American dam construction, from the 1930s to 1960s, a symbol of America’s burgeoning industrial might and a major source of renewable energy.

Lately, however,these big Western dams have been suffering the effects of climate change. Extreme drought has drastically reduced reservoir levels and is causing a decline in electricity production from hydropower.

Yet while climate change has parched the West, these same forces have greatly increased precipitation in much of the Midwest, the South and the East. There, hydropower is gaining momentum, and supporters say that in many places it is poised for a big resurgence.

This is good news for existing hydropower in those regions, but it also benefits a growing effort to retrofit so-called nonpowered dams, or any dams created for a need other than hydropower, for electricity production. The effort received support in last year’s landmark infrastructure law, which provided $2.3 billion in dam funding and $753 million that will go toward dam safety and environmental improvements, as well as adding hydropower to nonpowered dams.

But the push to retrofit dams also worries some environmentalists, who say dams can be a source of greenhouse gas emissions themselves and that converting them to hydropower could worsen the problem.

In 2016, a U.S. Department of Energy study forecast that hydropower in the United States could expand from its current capacity of 101 gigawatts to nearly 150 gigawatts by 2050. This growth would come not from new dam construction but from upgrading existing hydroelectric resources, adding pumped storage capacity, and retrofitting nonpowered dams for hydropower.

Most American dams are more than 60 years old, and many have outlived their utility or present public safety risks. There is a consensus both in the hydroelectric industry and among environmentalists that these dams should be removed. However, there is growing interest on the part of hydroelectric companies to tap into the energy-producing potential of the nonpowered dams that remain essential to our infrastructure.

“There are a lot of dams that are on the landscape that aren’t serving a purpose and wouldn’t be economic generators were you to add hydropower to them. Those dams need to be removed,” said Kelly Catlett, the hydropower reform program director for American Rivers, a nonprofit focused on protecting and restoring rivers and riparian ecosystems. “But where you have a dam that is serving another purpose and it’s going to be around for a while, why not put hydropower generation on it?”

Nonpowered dams compose the vast majority of America’s dam infrastructure. They can be found across the country, come in all sizes and were built to address a wide array of needs, including flood control, navigation, water supply and recreation. Out of the estimated 90,000 dams in the United States, about 2,200 of them generate hydroelectric power. These hydropower resources, however, account for 7 percent of national energy production and contribute 37 percent of the nation’s renewable energy supply.

Hydropower interests and their supporters stress that hydropower could play a crucial and potentially unique role in energy production. Solar and wind produce energy intermittently, but hydropower can operate day or night, 24/7. Some hydropower facilities can shut down or ramp up energy production very quickly, providing energy grids with stopgap flexibility during peak demand or in the case of blackouts.

Environmental groups stress caution, however, noting that even existing nonpowered dams can produce negative environmental impacts such as blocking fish passage and sediment transportation and can contribute to methane emissions.

“We know that there are significant methane emissions coming from reservoirs and that hydropower operation can increase those emissions because of the operations of the project,” said Colleen McNally-Murphy, associate national director for the Hydropower Reform Coalition. “There is a role for hydropower in this country’s energy portfolio moving forward, but it’s important to recognize that there are trade-offs there, as well.”

Methane, a powerful greenhouse gas, is emitted by fossil fuel production as well as by livestock and agriculture. It naturally emits from bodies of water as a result of the decomposition of organic matter. Those who favor hydroelectric power strongly disagree that America’s older dams and reservoirs have serious methane emission problems.

“Every single water body from a marsh, to a wetland, to a lake omit a certain amount of methane. It’s just a natural process,” said LeRoy Coleman, director of communications for the National Hydropower Association. “So, from our perspective, it’s inaccurate to label hydropower, particularly nonpowered dams, as major emitters of methane. It just doesn’t stand to reason.”

The addition of hydropower to nonpowered dams can be financially attractive to developers. Typically the dam’s operation is not changed, so there is usually much less opposition from communities and environmental groups than there would be to a new dam project.

Both sides agree that the methane issue needs more study and that the exact science on methane emissions from hydroelectric power is not yet settled.

“The jury is still out on whether reservoirs emit more methane than natural lakes,” wrote Bridget Deemer, a research ecologist with the U.S. Geological Survey, in an email.

Deemer added that a 2016 study she was the lead author on found that reservoirs emit more than previously estimated. “However, more recent work indicates that lakes and reservoirs may be pretty similar. The exciting thing is that reservoir ecosystems are highly managed to begin with so managers have an opportunity to adjust [reservoir] operations based on what the data shows.”

Many of the nonpowered dam projects being developed are run-of-the-river hydroelectric systems. Instead of using reservoirs, these projects typically rely on the natural flow of the river to spin a turbine and generate power, so their methane emissions would most likely be very limited.

Rye Development is a leading developer of run-of-the-river dams and has 22 licensed hydropower projects in its pipeline.

The scale of these projects varies. The smallest is Kentucky Lock and Dam 11 on the Kentucky River. This hydropower conversion makes use of a lock and dam system developed by the Army Corps of Engineers. The lock and dam now belong to the state of Kentucky, which maintains the system to provide drinking water and is thus critical infrastructure. When completed later this year, the project will produce 18,500 megawatt hours annually, enough energy to power 1,700 homes.

Rye’s largest retrofitting project is the Overton Project on the Red River in Louisiana. It is a 49 megawatt project that when finished will provide enough electricity to power more than 9,000 homes.

“We see an opportunity for hydropower that really is going to have a limited impact on the environment,” said Paul Jacob, Rye’s chief executive. “That for us dictates where we go; we start out looking for dams that are there for an essential purpose. By and large, those are navigation dams or dams that are on flood control properties, and most of those projects are maintained and owned by the Army Corps of Engineers.”

Jacob pointed out that Rye Development tends to develop sites that are close to each other and affect the same watershed. Having small hydropower plants close to each other can allow communities to operate their own microgrids, a concept increasing in popularity because it can lend a local grid resiliency in times of crisis or power outage.

“This is a resource where infrastructure is already built, the dams are still being maintained, and they are not going away,” Jacob said. “So why not capture that energy and use it? Otherwise, you know, it’s a wasted resource.”